TOR WAR is located in Chicago, Illinois.
You can find him in most places on the Internet under @torwar_ or some such variation.
He is currently looking for a literary agent, and is available to hire for:
comic art,
book illustrations,
TTRPG splash art,
character designs,
album cover art,
and other commissions.For specific inquiries, please email:
[email protected]
He would be happy to hear from you. 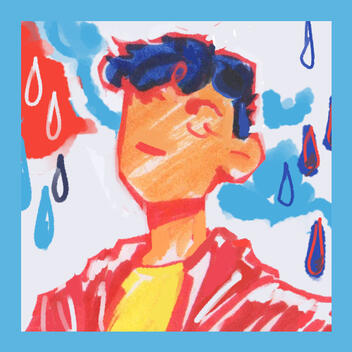 "MAKE A CREATURE THAT WILL DO WHAT I SAY, OR LOVE ME." (2021)Words and title by Richard Siken.

"I LOVE YOU, I'M SORRY." (2020)Karma is special. Angel hair, angel blood. She knows, and her family knows and the village knows, so they spoil her. But instead of gratitude, it only teaches her to take, and take, and take. She doesn't understand just how much she has to lose. Published in Pest Control Magazine and Stratos: A Dream Anthology.

"IN BETWEEN." (2020)A reflection on identity, belonging, and modes of transportation. Autobiography. Published in Immigratitude: Tales of Asian Immigration

“ATLAS.” (2019)A world on the verge of discovery, at the cost of a great loss. The Atlas is the supreme scholar in the Realm of Ouraminos, who advises the Vasilissa on how best to rule. Part of the CRUEL HALVES series.

"WHEN POPPIES LISTEN." (2019)(Assorted pages, 49 total) Dune, an elvish cleric, is looking for an old acquaintance. Toska hasn’t written to him in two months, and Dune is starting to worry about the wood elf’s wellbeing. In the meantime, Nicholas seems to be ignoring him as well. That alone isn’t so out of character for the freckled tiefling, but Dune receives a letter that implies Nick might be in danger too. In his frustrated search, he learns that Nick is keeping something from him, and Dune is very much going to find out what.

"APPLE & CRISPIN." (2018)(Excerpt, 8 total) A Stardew Valley Fancomic, featuring original characters. Crispin is a city boy who's moved to the countryside to escape the stresses of an urban lifestyle. Lucky for him a posting on JunimoList was asking for an extra farmhand on an apple farm! Wait, not an apple farm, just a farm... owned by someone named Apple... Will Crispin overcome his sleepiness? Will Apple's morning cheeriness encourage him!?

“FORTUNE COOKIE TELLERS.” (2017)Fortune cookies across the Tianquong Empire have been revealing the names of murderers before they strike. Liying is warned to get out of town after her own name is found in a cookie, but she hasn’t committed any crime – yet. Part of the CRUEL HALVES series.

"CARTOGRAPHY." (2017)(Assorted panels) A comic project where each panel was individually animated. Part of the CRUEL HALVES series.

"SAFI CYCLE." (2019)An angel attempts to protect her church from a visitor in the form of an Infinity comic.

"WE ARE IN MEDIA RES, LOVE. PT II."An experiment in nonlinear and (optionally) collaborative storytelling: a card game, or a puzzle, or a map, but it is always a story. It is a mimicry of the way humans sort through memories, or the way an archaeologist uncovers artifacts. The story can be completed, but it is not required to, as all stories have unaccounted for endings due to time constraints, misunderstandings, or loss of interest. The piece consists of 116 (current count, to be updated) cards which can be matched together and read, through a group perspective, or alone. The audience is encouraged to interact with the piece, flipping over cards, reading them, and pushing them together to create different shapes and stories. Each individual piece is a 3”x3” ink-washed card with white writing. Part of the CRUEL HALVES series.

"SAFI'S CLOUD." (2018)A small platformer demo about an angel who has to protect her heavens from the moon rabbits. Original art and music by TOR WAR. Available only for mac.DOWNLOAD FROM ITCH

"COLD." (2018)A game demo where you must switch between characters to complete the game. Hal Fremont and Tide O’Streil search for refuge in a snowstorm. They are trailed by monsters who are attracted by Hal’s lantern, and can be dispersed by Tide’s magic. Part of the CRUEL HALVES series. Available only for mac.DOWNLOAD FROM ITCH

"EPHEMERALITY." (2018)A forest walking demo. They say that nothing lives in the Motux Woods. The grass was dying beneath the immortal shadow effigies, whose unseen tops would bear leaves to join the dead underlayer of the forest. Plaintive bushes pushed up out of the ground, reluctant to join the graveyard to little or no avail. It was rumored that nothing but magic could fester in this forest, but even that would be a miraculous thing to behold. The trees knew that the forest belonged to them, and that it would for the rest of eternity. Part of the CRUEL HALVES series. Available only for mac.DOWNLOAD FROM ITCH

"RIN." (2018)A work-in-progress demo of a point-and-click game, taking place in a cursed woods inhabited by only children. Available only for mac.DOWNLOAD FROM ITCH

"BEIHE AT THE SEASIDE." (2017)Cut-out animation loop. Part of the CRUEL HALVES series.

"STATIC LULLABY." (2016)A one-sided story about narrative elements, from the perspective of two characters. Part of the CRUEL HALVES series. Original art and music by TOR WAR.

"STAR SOUNDS." (2016)An exploration in space romanticism. What do stars sound like? Original art, animations and music by TOR WAR.